Would you like to switch to the accessible version of this site?

Don't need the accessible version of this site?

Why Root Canals Are Not......Like Having Babies

Recently, a 12 year old girl came to my practice with a badly decayed 6-year molar tooth requiring root canal therapy. Just before she came in, her teacher at school said, "Oh, you poor girl - having a root canal is so painful, it's worse than having a baby." Needless to say, this made the girl very apprehensive and fearful of the pending procedure. 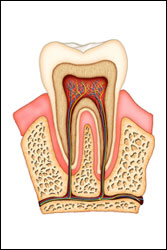 of my favorite procedures to do as a dentist. Of all the dental treatments I do, a root canal has the most guarantee that the tooth- which already hurts- will be relieved of pain and most likely never hurt again!

What is a root canal?

Every tooth has one or more tiny canals in its center that house nerves and blood vessels. A canal is very small- usually less than one millimeter wide. The blood supply to the tooth is important when the tooth is developing, but once the tooth has erupted, its importance is greatly reduced.

Sometimes, because of decay or trauma, the blood vessels and nerves become inflamed or infected. This is usually painful.

Root canal therapy is a procedure which removes the nerves and blood vessels from the tooth, thus eliminating the source of the pain.

Patients are anesthesized (numbed) before the procedure. 95% of the time, NO pain is felt during the treatment, except occasionally for a few seconds when the nerve is first touched.

Some residual discomfort occasionally occurs for a few days after the procedure, mainly because the surrounding bone and gums may hurt. Usually this is only mild to moderate, and easily controlled by medicines such as ibuprofen. Once in awhile, more severe discomfort requiring stronger pain relievers may occur.

The vast majority of patients who have had a root canal say they expected it to hurt a lot more than it actually did.Root canals have a 90 to 95% long-term success rate. Occasionally they need to be retreated, or another type of procedure is required.Because a root canal hollows out the tooth's center, it is usually wise to put a crown or cap on the tooth afterwards.

I don't know how or why root canals earned such a bad reputation. When a root canal is needed, I have found that in all my arsenal of dental procedures, there is no better one available to get and keep a tooth out of pain.

Ready to alleviate your tooth pain? Call Dental Arts Center in Colorado Springs at (719) 528-6441 for your root canal appointment.

Send Us an Email

Find us on the map